Carptoria sessions – Fishing in and around Pretoria

The capital city is not only one of the major diplomatic centres of the world, but also has some very nice carp fishing dams in and around it. In december we visited a few of them just to get some lines in the water and maybe catch a carp of 2. We visited the 3 major dams in the area namely Rietvlei Dam, Roodeplaat Dam and Hartbeespoort Dam. These 3 well known dams surround the capital city and they are home to some amazing fish.

I was joined by my good friend Immanuel on all 3 one nighters. First we visited Roodeplaat Dam where we were fortunate enough to get access to the dam wall side of the dam which is not often targeted We sat on a very secluded spot right on the fence. Fishing was extremely tough after being wiped out by a huge storm that night. We did manage to get 1 big barbel but unfortunately the carp were not interested.

So we moved to our next stop which was Rietvlei dam which sits on the eastern side of Pretoria. This dam is known for its huge carp and is open to the public. This is also the dam closest to where we live so always lekker to just pop in for an overnighter. This night was a special one. After setting up and baiting up almost all of our bait spombing the wind suddenly picked up and within a few minutes we had a mini hurricane on our hands. The wind pumped straight into the sloep which usually means the fish are on their way there. I quickly jogged down to see if i can spot anything on the back of the wind and sure enough, as i was watching the water a hugh tail fin showed right in front of me in between the huge bashing waves. 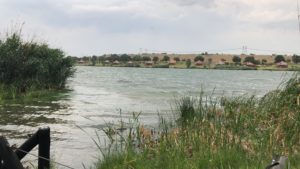 I knew there was only one way – Pack up and move! in the storm! As terrible as that sounds if we wanted to catch that night we needed to. After getting everything set up we eventually got one line in through the storm. And while we were busy getting the 2nd line ready sure enough it took off not even 15 minutes after dropping. Immanuel played the fish nicely and it was a good size common of about 8kg and a very good start. We struggeled through the windy wet weather to get all our lines set and by 11pm we were finally fishing. We got another run at around 2am on the same rod and then as the sunlight crept over the horizon my margin rod was away. I played in a lekke little common and quickly cast it out again. At 5.30am that same rod was away again and we had another good common. We had 4 runs that night whilst the rest of the bank was quiet with no action – proving that a dreadful move in terrible weather is worth it if you wana catch a carp 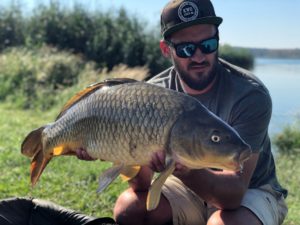 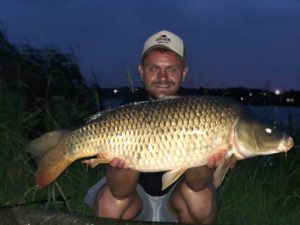 Our Next stop was Hartbeespoort Dam. The famous carp wild water that everyone knows but most neglect thinking about the hyacinth and the crime and the stinky water. We found a good spot on the dam was set up within minutes. This time we had both our boats – one was to be parked in the marina where the fish hide under the boats and the other in front of our swim of course. We dropped our lines at sunset – some under the boats and others at about 2m- 3m depth (not too deep). We had a good feed going consisting of maize, tigers and crushed boilies. 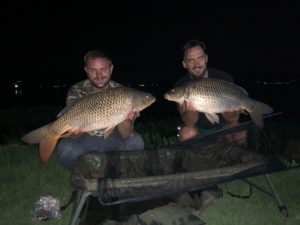 That night at 11pm just as we got into bed by middel rod slowly started ticking. bleep…..another bleep and i was up. 3rd bleep i knew we had something on the other end. As i picked up my rod it felt like i struck into a huge boulder. The fish realised it was hooked and started pulling. It felt big! I pulled a bit to get it to turn but nothing. I pulled a second time and this just a tad harder and pop…. i felt nothing. The hook had pulled and i realised i had made a rookie mistake and lost a very good fish. After resetting immediately we got back into bed. And as you know – as soon as my eyes shut the 2nd run. I was up and this time i gave the fish room to run. It ran and ran and i tried pulling back but this fish was strong. Eventually i felt something scratching on my line and knew that the fish went around the cable that was holding the bouy. I chased after it with the boat and eventually realised that another big one had escaped. That night we had each had 4 runs and 2 fish of which the biggest was a 9kg that i managed to land in the night. We never slept a minute that night but were pretty chuffed about the overall outcome of the night. 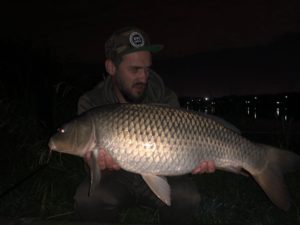 South Africa’s public dams have so much good carp on offer and those who take the chance to get out there do get rewarded. Sometimes with massive carp and other times the carp have the upper hand but at least you get to enjoy outdoors in Africa! Loved the trips and will be back for more in 2019 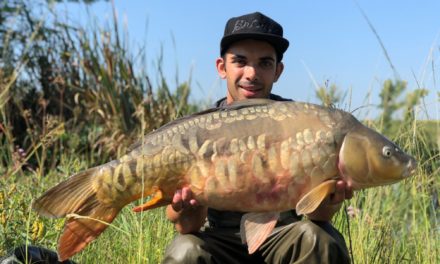 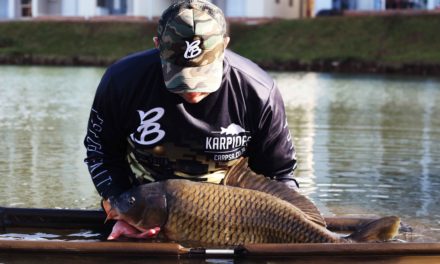 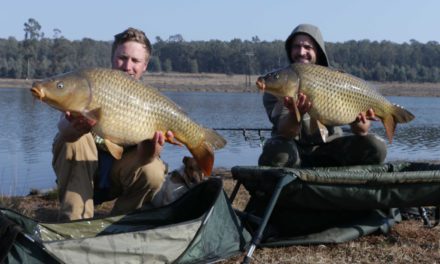 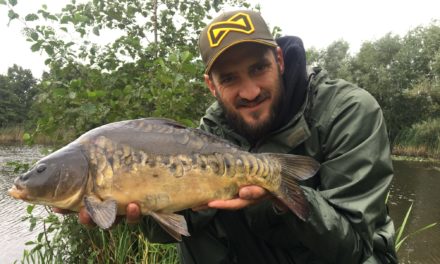